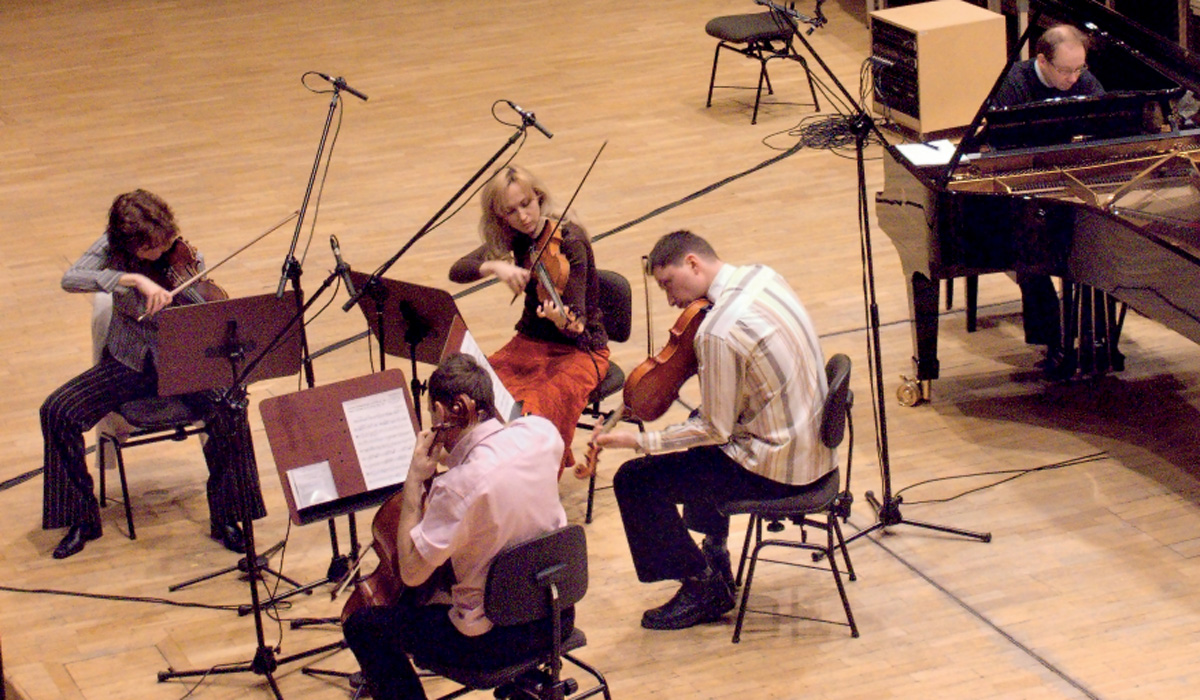 Right from the start the Royal String Quartet has been fortunate to improve their skills under the guidance of outstanding musicians. Initially, these were members of the Camerata and Wilanów Quartets. Upon graduation from the Music Academy in Warsaw, the Royal String Quartet worked with the Alban Berg Quartett at the Hochschule für Musik in Cologne (2001-2004). The ensemble has also worked with musicians from the Amadeus, Guarneri and Chilingirian Quartets.

From 2004 the Royal String Quartet has been part of the BBC’s New Generation Artists, a scheme promoting most talented artists from around the world. This has enabled the ensemble to perform in prestigious festivals, appear on radio and make recordings (these include Mendelssohn’s Octet with the Psophos Quartet). The Quartet has participated in many festivals in Poland (the Mozart Festival, the Easter Beethoven Festival) and abroad (BBC Proms, City of London, East Neuk, Lichfield, Aldeburgh, Pulse, Angela Hewitt’s Trasimeno Music, Next Generation in Dortmund, Musikfesttage in Frankfurt, Classique au Vert in Paris and the Perth International Arts Festival). In 2004 the Royal String Quartet performed for Queen Elizabeth II during the official visit of the Polish President.

Since 2004 the Quartet has run its own chamber music festival in Warsaw under the motto Kwartesencja (Quartessence), which has already won a wide following and media recognition as the ‘Cultural Highlight of 2004’.

The Quartet has performed with such artists as Angela Hewitt, Sir Thomas Allen, Ann Murray, Antoine Tamestit, Christian Polter, Cédric Tiberghien, Martin Fröst, Cédric Pescia, Llyr Williams, Klaudiusz Baran, Tomasz Strahl, Wojciech Âwitała and Michał Nagy. The venues of their appearances include the Wigmore Hall and Cadogan Hall in London, Bridgewater Hall in Manchester, Le Grand Theatre in Bordeaux, the Palais des Beaux-Arts in Brussels, Vienna’s Konzerthaus, and the Witold Lutosławski Hall of Polish Radio, the National Philharmonic and the Royal Castle in Warsaw. Many of their concerts have been broadcast on Polish Radio 2, BBC 3 and other European radio stations.

The discography of the Royal String Quartet comprises 4 CDs: Haydn, Mozart, Beethoven (debut CD for the DUX label, nominated for the Fryderyk Award of the Polish recording industry in 2002), Astor Piazzolla – Tango (for Sony Classical, the Fryderyk 2003 Award in the chamber music category), String Quartets by Moniuszko, Szymanowski and Bacewicz (BeArTon, 2006) and Juliusz Zarębski’s Piano Quintet (with Wojciech Świtała, BeArTon, 2006).

What the critics say: The most memorable playing came from Poland’s Royal String Quartet (…) a performance brimming with musical intelligence and finesse. – The Strad (January 2005) This concert offered an illuminating conspectus of the talented Royal String Quartet (…) The fusion of taste, poise and sensibility really come into its own. Daily Telegraph (a review of the concert in Wigmore Hall, June 2005)

The Best of Zarebski