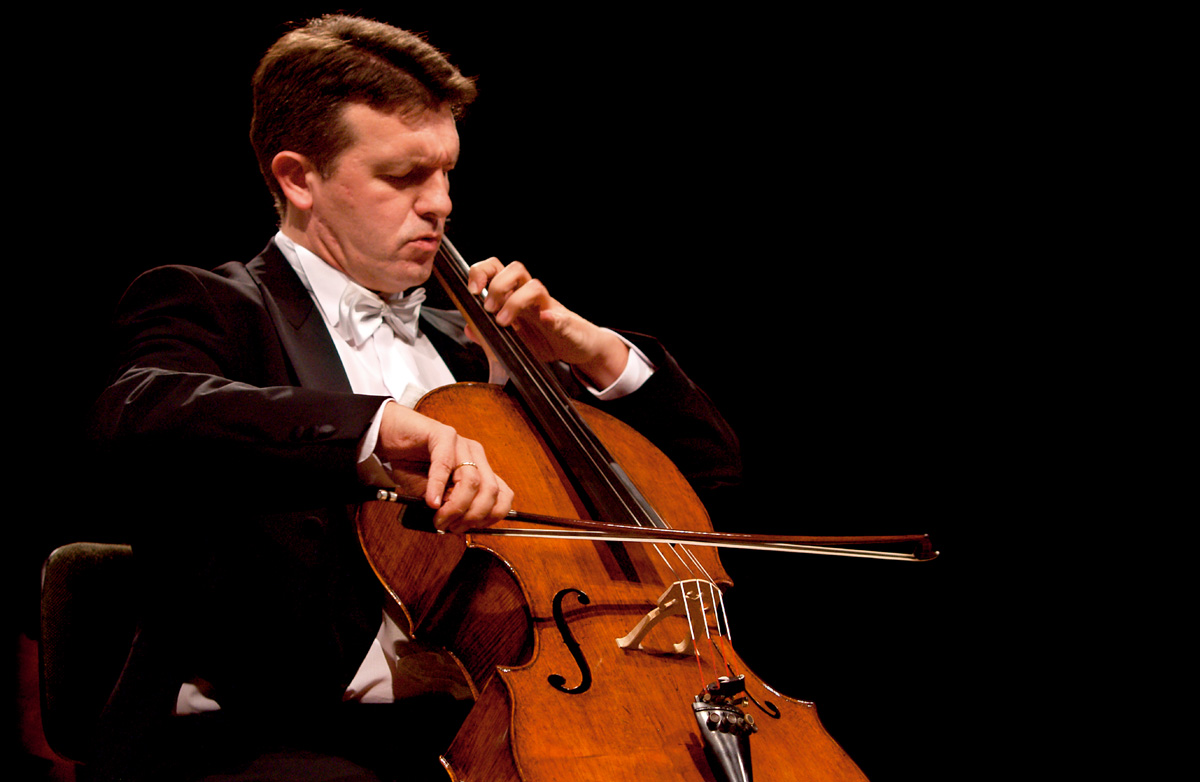 He is the youngest Professor of Music in Poland. He graduated in 1989 from the Chopin Music Academy in Warsaw, where he studied cello with Kazimierz Michalik. Thanks to a grant from the Austrian Government, he continued his studies with T. Kühne at the Hochschule für Musik und Darstellende Kunst in Vienna. He also studied chamber music with the outstanding violinist Krzysztof Jakowicz, his concert partner for many years.

He won First Prizes at several national and international competitions including the Academic Cello Competition in Warsaw (1987) and the 5th Nicanor Zabaleta International Music Competition in San Sebastian (1991). In 1994 he received a grant from the Polish-Japanese Foundation JESC.

He has performed in such prestigious venues as the Schauspielhaus in Berlin, Brucknersaal in Linz, St. John’s Smith Square in London, Art Center in Tel Aviv, Toppan Hall in Tokyo, L’Auditorii in Barcelona and the Warsaw Philharmonic Hall. Foreign tours have taken him to Japan, Canada and Spain (with the Silesian Philharmonic). He performed music (together with the pianist Krzysztof Jabłoński) to a ballet Fortepianissimo (Warsaw’s Grand Theatre) and has been invited to many festivals, including the Warsaw Autumn, Music in Old Kraków, Bravo Maestro, the Festival in Guadix (Spain), Chopin a Paris, the Cello Festival in Caracas, the Chopin Festivals in Duszniki-Zdrój and Antonin, the Polish Piano Festival in Słupsk, the Organ Festival in Kamień Pomorski, the Music Festival in Bydgoszcz and Warsaw Music Encounters. A major highlight in Tomasz Strahl’s career was the performance of Witold Lutosławski’s Cello Concerto in 1993, in the composer’s presence. Strahl has to his credit the first performance of Piotr Moss’s Cello Concerto No. 2 (with the National Polish Radio SO, 2005) and the premiere recording of a recently discovered Cello Concerto by Zygmunt Stojowski (with the National Polish Radio SO, 2006).

He is the founder (with the pianist Krzysztof Jabłoński) of the Chopin Duo. He has made numerous recordings for Polish Radio and Polish Television, CBC Radio in Canada, as well as on various labels (Pony Canyon, CD Accord, Polish Radio Katowice, Pavane Records, Gema Stereo, Pol-Music, Acte Préalable, Sony Classics). He received the Fryderyk Prize of the Polish recording industry (2003), as well as three nominations for this prize.

He also also developed a successful teaching career. He is in charge of cello classes at the Music Academies in Warsaw and Łódż. He also gives masterclasses in Poland, Holland, Finland, Germany, Japan (Kyoto University of Arts) and South America. He received the title of Professor in June 2001 and the Golden Cross of Merit in 2002. In 2005 he gave a series of lectures and concerts at the prestigious International Academy Vienna-Prague-Budapest.