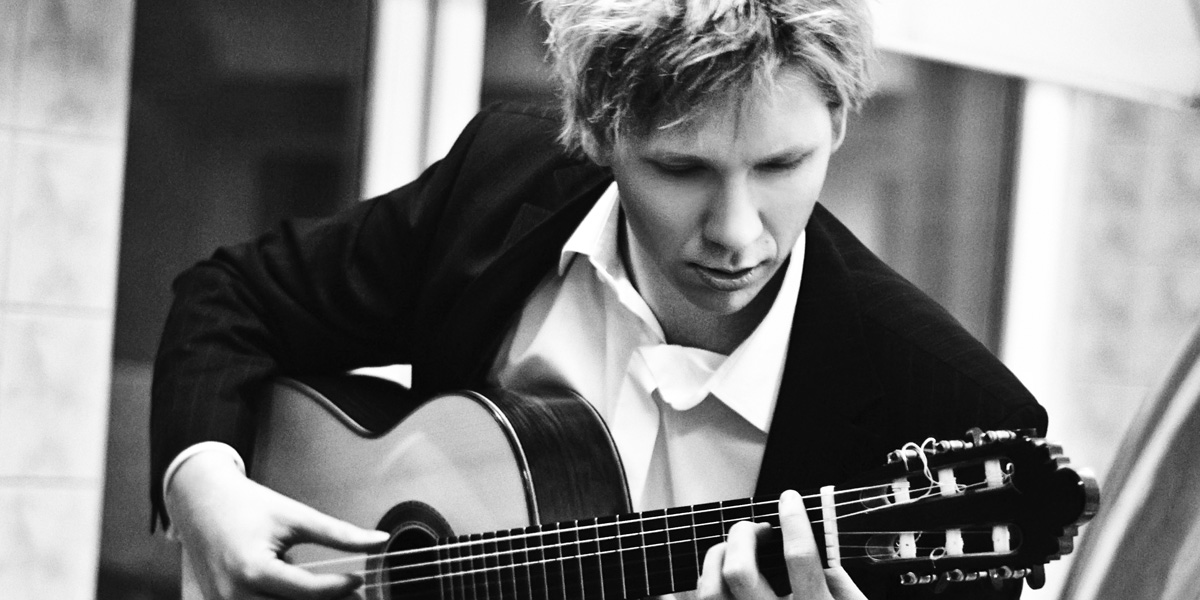 Roch Modrzejewski studied guitar with Prof. Pablo Marquez at the Musik-Akademie der Stadt Basel in Switzerland, from which he graduated with distinction in 2009. He is also a graduate of Michał Nagy at the Academy of Music in Kraków, which he finished in 2007 with the highest grade. During this time, he continued his studies at the Hochschule fijr Musik Franz Liszt Weimar under Prof. Thomas Miiller-Pering. Roch is an organizer and the Artistic Director of the „Nowa Huta Guitar Autumn” International Guitar Festival in Kraków.

The guitarist has been honoured multiple times with prestigious awards and scholarships for artistic achievement, such as Polish Minister of Culture Scholarship, the City of Kraków Scholarship, Swiss Government Scholarship, ”Young Poland” Scholarship, and the Crescendum Est – Polonia Scholarship.

He has attended masterclasses of such guitar virtuosos as Abel Carlevaro (Uruguay), Carlo Marchione (Italy), Pavel Steidl (Czech Republic) Ricardo Gallen (Spain), Joaquin Clerch (Cuba) and Fabio Zanon (Brasil). His interest in early music led him to workshops of such artists as flautist Rachel Brown (UK) and Baroque violinist and conductor Simon Standage (UK). He has also mastered his knowledge of early music by studying chamber music with Polish harpsichordist Elżbieta Stefańska. Roch Modrzejewski performs in Poland and abroad, and gives recitals and chamber music concerts at major music festivals. He has performed in such places as the King’s Castle in Warsaw, the Belarus National Philharmonic in Minsk, the Lublin Philharmonic, or in the Philharmonic Hall in Kraków. He has also recorded for radio and television.

In addition to his solo performances, he frequently plays chamber music concerts in duos with clarinet, harpsichord, violin and guitar. His broad and diverse repertoire includes works from the great Renaissance composers to contemporary music. He also gives concerts as a soloist with orchestras, performing Vivaldi, Hagen, Villa-Lobos and Rodrigo guitar concertos.

In 2009 the label ”Castello” released his solo recording ”Gustoso”, which was later chosen a CD of the month and awarded with the maximum note – 5 stars, by the renowned Italian magazine “Seicorde”. Ermanno Brignolo writes there:

The guitarist Modrzejewski shows an outstanding musical knowledge, and nothing, in his interpretations, lets us perceive his young age. It will be interesting to follow his career: it shall keep very interesting surprises.