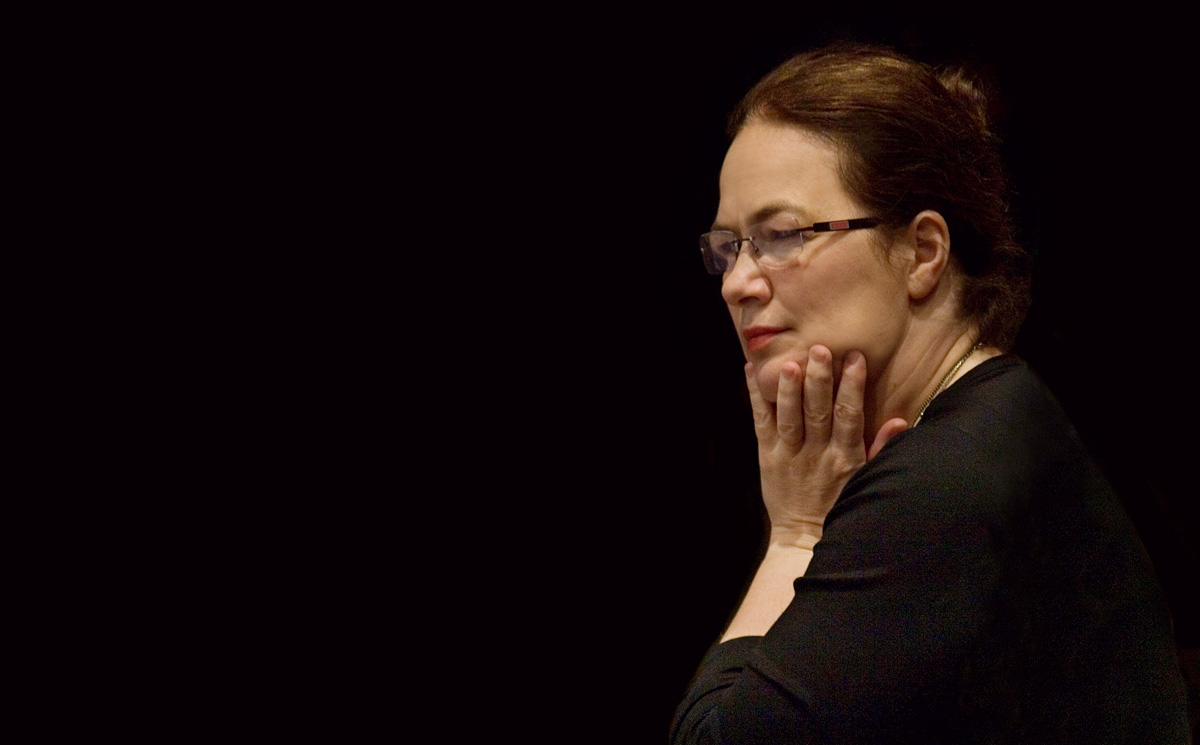 Ewa Pobłocka – Prize winner at the 10th Fryderyk Chopin International Piano Competition in Warszawa and was also honoured with the Polish Radio Award for the best performance of Chopin mazurkas [1980].

She began taking piano lessons when she was five years old. She pursued her studies at the Music Academy in Gdańsk under Prof. Zbigniew Śliwiński and Prof. Jerzy Sulikowski, and received her diploma with distinction in 1981. She completed post-graduate studies in Hamburg under the direction of Conrad Hansen [1979–1982]. And she benefitted from artistic consultations with Jadwiga Sukiennicka, Rudolf Kerer [1977], Tatiana Nikolaieva [1981] and Martha Argerich [1981].

She began her stage career by performing duets with her mother, the known singer Zofia Janukowicz-Pobłocka [1970]. In 1977, she won first prize at the G. Viotti International Music Competition in Vercelli, two years later [1979] she won the gold medal at the International Festival of Young Laureates in Bordeaux.

She has given performances throughout Europe, both Americas, as well as in Singapore, China, Indonesia, South Africa, Korea, Japan and Australia. She has been applauded at the Herkules-Saal in Munich, Musikhalle in Hamburg, Auditorio Nacional in Madrid, Barbican Centre and Wigmore Hall in London, Musikverein in Vienna, Lincoln Center in New York, Glenn Gould Studio in Toronto. She played as a soloist with the London Symphony Orchestra, English Chamber Orchestra, Orchestra del Maggio Musicale Fiorentino, Bayerischers Rundfunkorchester, Niederösterreichisches Tonkünstlerorchester, Sinfonia Varsovia, Polish National Radio Symphony Orchestra in Katowice. She has repeatedly toured as a Warsaw Philharmonic Orchestra soloist under the baton of Kazimierz Kord and Antoni Wit.

Ewa Pobłocka performs for many European radio broadcasters. She has also made more than 40 records under such labels as Polskie Nagrania Muza, Deutsche Grammophon, Pony Canyon, Victor JVC, Conifer Records, CD Accord, BeArTon, many of which have been awarded and enthusiastically acclaimed by critics. On her most recent CD albums we can find Edvard Grieg’s complete piano works, and Johannes Brahms, Robert Schumann’s solo compositions, Fryderyk Chopin’s complete songs. In 2010, the Fryderyk Chopin Institute released her CD with Chopin’s Mazurkas and Sonata in C minor on period piano [Pleyel, 1848].

Ewa Pobłocka is also a distinguished music educator. She teaches a piano class at the Music Academy in Bydgoszcz and the Fryderyk Chopin University of Music in Warsaw. She is also a guest professor at the National University of Fine Arts and Music in Tokyo and Nagoya. She serves on the jury of many international piano competitions.

The artist has received the annual Minister of Culture Ministry of Culture and National Heritage Award and the Cavalier’s Cross of the Polonia Restituta Order from the Polish President [2004], and the presidential title of professor [2007].